Follow Us
View cart “Anti-Ageing / Healing Cream 50 ml (NEW)” has been added to your cart. 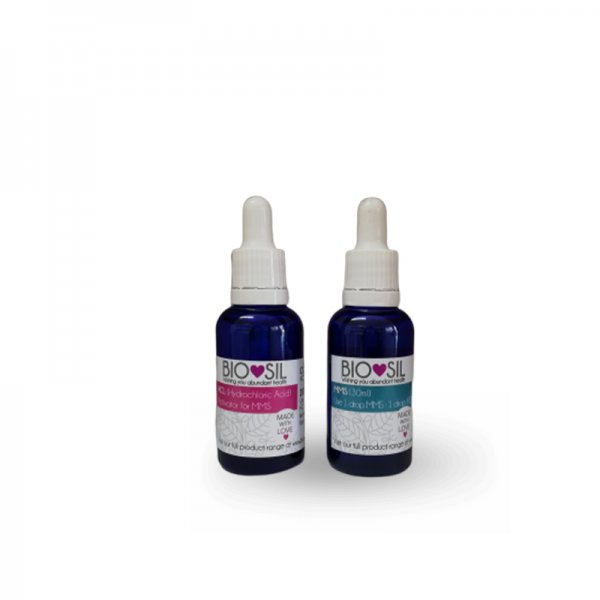 Benefits:  A simple and effective means of removing bacteria, viruses and other pathogens.

Please do yourself a favour and download Jim Humble’s latest book here: https://jimhumble.is/bookstore

or purchase paperback book (currently on special)  online at this website: https://biosil.co.za/product/mms-book-by-jim-humble/

This amazingly powerful compound has stood the test of time in the alternative health field – because it works so well.

Jim Humble found that his simple water purification formulation was absolutely deadly against the Malaria parasite which is responsible for millions of deaths every year.  …. and so began a discovery of many other benefits.   Ref: https://jimhumble.co/

Combine two drops of MMS with two drops of the accompanying HCl.  Mix thoroughly and wait at least 20 seconds.  Next add the mixture to one gallon (3.8 liters) of water to remove all germs, parasites, and most heavy metals. The water will become odor free and purified within ten minutes after mixing

NB  It’s important to keep a bottle of MMS handy in case of disasters and emergencies. One of the hardest things to find on such occasions, is safe drinking water.

Happy feedback from a pastor:

” The MMS has been joyously effective to a friend of mine to whom I gave it on 14th December. He is a cancer sufferer. I mixed the first take of the protocol so that he could see how it is done according to the instructions. He contacted me after two weeks to me with ecstatic good news. Thirty minutes, he says, after the second take of the protocol he began to experience a radical change in his condition; he regained his voice which he could only use in a whisper for the previous six months, he back pain was gone after an  ineffective prescription on the strongest  of morphine, he regained his eyesight after being unable to drive his car even with glasses and, whereas, he was out of breath after a 50m walk, he now deliberately walks 12km every morning. I want to order more.  Father A “

Residents of Hamilton, OHIO love their tap water. The National Citizen SurveyTM recently reported a 94 percent rating of Hamilton’s water as good or excellent. Hamilton residents rated their water far higher than residents of any other municipality participating in The NCSTM this year.

“I am not surprised” said Jacob Stone of the City of Hamilton and three year resident. “We have won multiple awards for our tap water.”

The use of MMS on the skin can be a very important use. It destroys almost every kind of skin disorder known, and causes burns, and wounds of all kinds to heal often in less that 1/2 the ordinary time. Unfortunately I was not able to complete the research on MMS before I wrote the first book and only recently have completed a six month test concerning the skin. I am sorry that this data couldn’t have gotten to you sooner as it would have save some people a certain amount of suffering.
So here are the basics regarding skin treatment with MMS. I have just done more than 6 months spraying my body every day with a very strong solution of MMS activated with the required amount of citric acid solution. (we now use HCl and no longer citric acid) I sprayed in many places on my body to see the results on heavy weather-beaten skin to the most tender white skin available. I usually sprayed several times a day. I sprayed on my face most days as well, and often rubbed around my eyes so that the rubbing would allow a tiny amount of MMS to leak into the eye itself.There were places where I didn’t spray to show the difference between treated areas and untreated areas over a period of six months. The results were this: After more than six months, there was no difference between the areas sprayed and the areas not sprayed. There was no skin discoloring, nor any change in the texture, nor any other kind of a change including on my face.During the six months, there were times when small wounds or cuts happened. These I always sprayed and they disappeared in a day or two.This simply points out what I have said in the book and in other places. MMS does not affect normal body cells. It does not have the power. It only kills anaerobic microorganisms on the skin or in the body.Many skins have been treated including babies’ skin.
One more test was done that I thought you would be interested in was with chlorine instead of chlorine dioxide. Bleach of the standard variety, Clorox provides approximately the same amount of chlorine as the MMS provides of chlorine dioxide in the tests I was conducting. They are about the same strength but the action is much different.I put chlorine (Clorox) on the back of my hand every day several times a day for one week. I allowed the Clorox to dry in place just like I did the MMS. After only one week the back of my hand had become discolored, the skin had hardened and began to crack in two areas – the surface of the skin had lost its feeling, and the area was painful under the skin.It was obvious to me that continued use of the Clorox on the back of my hand would create a very sore cancer like area. It took about two weeks for my hand to return to normal. So if you know anyone who insists that chlorine and chlorine dioxide are similar you can have them read this article, and then if they still don’t believe it, it is a test that they can conduct themselves.
Use MMS for healing sores, burns, wounds, psoriasis, eczema, cancer, ringworm, acne, rashes, staph infections, athletes feet, and a hundred other problems of the skin. In order to do this follow these instructions: Obtain a 2 ounce mist spray bottle. Put 20 drops of MMS in the bottle and 20 drops of activator – swirl to mix, wait 3 minutes and then fill the bottle with water. You now have a spray solution that is equivalent to 40 drops in 1/2 glass of water in strength. This solution stays fresh for about 3 days. The reason it stays fresh for that long is because of the strength. Once it is diluted in the body it rapidly disintegrates. Or on the skin, it disintegrates as it dries.Once you have made your solution, you should spray any sore about once an hour or every two or three hours all day long. Allow the solution to dry on the sore. In case of a rash, spray it on the entire rash. Rinse off with clean water in the evening before bed, dry, and re-spray before going to bed. In case of babies under 2 years old I would suggest that you dilute the solution at least twice or start out with only 5 drops of MMS instead of 20.The MMS in the spray bottle will seldom ever cause stinging or burning or pain, but it can happen. If it does, pour out 1/2 of the liquid in the bottle and fill it with water thus diluting by 50%. If it still stings, do the same thing thus diluting it again. Continue this dilution until it doesn’t sting.In one person out of a thousand persons with skin problems, the MMS may sting badly and the problem will get worse. If this happens it is probably a condition that you have had for a long time. This is very rare, but it does happen. Don’t feel badly, there is a cure. Look under fungus protocol on this web site and follow the instructions. It will soon be gone.There are many problems of the skin usually causing sores or rashes. They could be poison oak or even cancer. Most should have MMS applied directly to them. The best way to do this is by spraying. The way I do this all the time is to use a 2 ounce spray bottle that makes a fine mist.As I mentioned wounds should be sprayed as soon after they happen as possible. It will decrease the healing time by a great deal in most cases as microorganisms are mostly the cause of slow healing.
Well, hope this helps. Archbishop Jim Humble

Disclaimer: The reader accepts 100% responsibility for any and all useof this product.