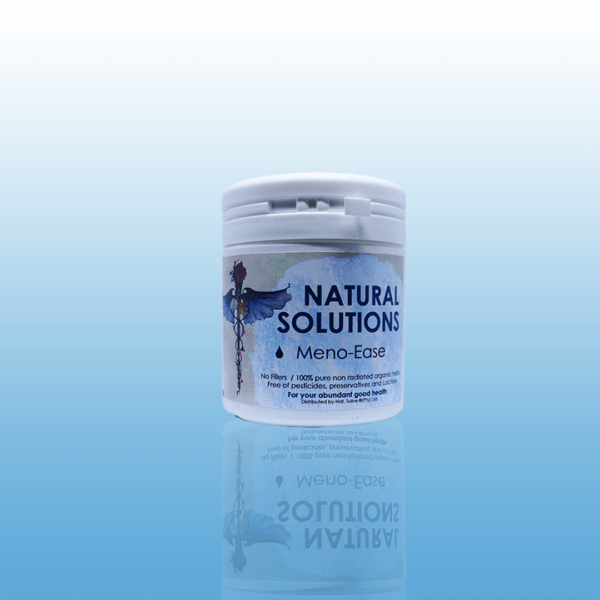 Meno-Ease   This all natural herbal blend contains 12 herbs to help ease the transition during menopause.  They positively affect hormone regulation in the body and help the hyper thalamus gland to perform at full potential

Description:  This all natural herbal blend contains 12 herbs to help ease the transition during menopause.  They positively affect hormone regulation in the body and help the hyper thalamus gland to perform at full potential

Avena Sativa – is the scientific name for wild oat, helps soothe the symptoms of low libido and menopause in many ways as wild oat stimulates thyroid function, which stimulates the production of progesterone in turn. Progesterone is the primary hormone secreted by the female reproductive system, and it is the lack of this hormone that leads to many of the uncomfortable symptoms of menopause, including decreased libido and vaginal dryness

Black Cohosh – Of all of the supplements thought to soothe the symptoms of menopause, black cohosh is the best studied which has shown it helps to reduce hot flashes and night sweats by an astounding 26 percent. However, women should confirm that they are post-menopausal prior to using black cohosh, as it can cause miscarriages when taken during previously undetected pregnancies. Women with diseases of the liver should also avoid using the supplement.

Red Clover – thousands of women claim that it helps soothe hot flushes, night sweats and fatigue. It contains compounds known as isoflavones that mimic certain hormones within the body, but the exact effects are not clear. It is thought to be safe and effective for treating menopause symptoms when it is used in small doses, but it should be avoided by women who have preexisting liver conditions

Hops – contain a potent phytoestrogen, which animal research suggests may have more oestrogen activity than other plant oestrogen’s. Because this particular phytoestrogen has been shown to have an oestrogen stimulating effect. Hops is prescribed by natural therapists for hot flushes associated with anxiety or stress, and associated insomnia (sleeplessness)

Wild yam contains a chemical called diosgenin, which can influence the production of several useful hormones in humans, such as estrogen or dehydroepiandrosterone (DHEA). Consuming wild yam may be a natural way of promoting these hormones in the body, which could have certain medical benefits. Wild yam is used as an alternative to estrogen replacement therapy for treating symptoms of menopause. The theory is that wild yam may increase or stabilize estrogen levels in the body to help relieve a person’s symptoms

Ginseng has been proven to help reduce the occurrence and severity of hot flashes and night sweats in menopausal women, helping postmenopausal women lessen their risk of cardiovascular disease. A 2010 study also showed that ginseng can help menopausal women increase sexual arousal and improve their sex lives. Taking ginseng as an herb can have many interactions with numerous medications include heart, blood pressure, diabetes, and blood-thinning medications. Side effects can include jitteriness, headaches, and nervousness

Chasteberry Tree has been found to treat premenstrual symptoms, help ease breast pain (mastodynia) and hot flashes in perimenopausal women. The herb also increases progesterone, which can help maintain a healthy balance between estrogen and progesterone throughout the transitions from perimenopause to menopause.

Those using hormones for birth control or hormone replacement shouldn’t use chasteberry. As well, those who’ve had hormone-sensitive diseases such as breast cancer

Cratageous – Hawthorn has anti-arrhythmic properties help control cardiac arrhythmia. The plant is able to dilate coronary arteries (which provide blood to the heart), lowering the risk of heart attack and increasing blood flow to the heart. Hawthorn can also lower systolic blood pressure—the first, higher, of the two numbers in a blood pressure reading—which is of particular value for those over 50, who run the highest risk of elevated systolic pressure. This herb also corrects blood pressure that is too low. It allows the menopausal woman through toning the nervous system to feel calm and less agitated during this transitional phase of life. As menstrual cramps can be due to inadequate circulation this herb helps to allow blood flow to be corrected

Motherwort – As we begin to go trough menopausal changes, menstrual cycles among other things can be affected. Premenstrual symptoms that were around in our teenage years can return or completely new symptoms can arise. Motherwort helps relieve premenstrual tension and discomfort and helps reduce spasms in the uterus whilst improving blood flow to the pelvis

Dong Quai – For centuries dong quai has been prescribed for hormonal imbalance. Recent studies have shown that women using dong quai have reduced symptoms of menopause

Calendula is used to enhance woman reproductive system, to regulate menstrual cycle and to relieve breast tenderness and menstrual cramps

There are no reviews yet.