Be brave and dig in here – this is incredible important information for both children, teenagers and adults.

Parasites have been found to be at the very root of a mindblowing array of health issues! 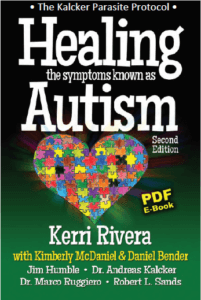 Herebelow is a segment from this amazing work:

Chapter 8
Step 3
The Kalcker Parasite Protocol
All of our fathers had a treatment for parasites as a part of their cultural
practice. We have gotten away from this because of our reliance on modern
practice. We would do quite well to relearn the ways of our ancestors in this
area and keep ourselves in relatively good health always.
~ Chief Two Trees

The word “parasite” comes from the Greek word meaning, “one who eats
off the table of another.”

Parasites, to Ancient Greeks, were those who
sat at another’s table, and paid for their meal with flattery.
As I mentioned earlier in the book, a very interesting thing started happening
with the CD enemas.

What we had previously believed to be mucous or
biofilm coming out with the enemas, turned out in many cases to be worms
(helminths) (aka parasites)—in rare cases they were still alive and wiggling
in the toilet! We believed the most common were Ascaris lumbricoides
(roundworm). However, what we are now seeing more and more appear to be
rope parasites, a potential new species of helminth discovered by Dr. Gubarev,
Dr. Alex Volinsky, and coworkers (submitted January 14, 2013). DNA testing
is the only way to definitively say, but at $25,000 USD for each analysis, with a
minimum of 100 test cases, it is rather cost prohibitive at the moment.

In addition to Ascaris and rope parasites, parents have also seen hookworms,
pinworms, tapeworms, and flukes, among others. This is an extremely
important piece of the puzzle for so many of our children. We have been
led to believe that in first world nations, parasites are not a problem. This is
absolutely not the case.

I was honored to have Dr. Andreas Kalcker and Miriam Carrasco Maceda
share a chapter from their upcoming book, Parasites: The Silent Enemy. Andreas
explains the importance of lifelong deworming, and shares with us a protocol
that has helped many children and adults become healthier; and for some
children on the spectrum was the last piece added that led them to recovery.
The version included here has been tailored specifically for children and adults
with ASDs.

The original protocol can be found at:

Very few details have been changed, but it is important to note that the
Parasite Protocol here is what has been proven to help many of our children
on the spectrum, including many of the recovered children.
Thank you Andreas and Miriam for your valuable contributions to this
movement, selflessly sharing your findings, and for always taking the time to help

HOW TO DETECT AND TREAT A PARASITIC INFECTION
Parasitic infections are more common than most people think, and may or
may not result in serious health problems. We may be infected with multiple
types of parasites, which vary in size and location, on or in the body.
Parasites can be classified as either microparasites, such as malaria that are
only visible under the microscope, or large macroparasites such as round or
flat intestinal worms (roundworms, tapeworms, etc.). These can be seen by
the naked eye, and can reach great sizes. Internal parasites are found, not only
in the intestines, as is generally thought, but anywhere in the body, including
the lung, liver, muscle, stomach, gallbladder, brain, blood, skin, joints, and even
in the eyes.

In recent history, the great migratory movements of the human population via
rapid transportation and widespread trading have shortened the distances that
previously had separated people and diseases. Formerly localized diseases have
thus become universal ailments. Parasites previously confined to very specific
geographical areas now appear in other locations, far away from their initial
homelands. Unfortunately, conditions typical of the lower socioeconomic strata,
(under which a large percentage of the global population lives) tend to favor
the transmission of diseases and parasites.

A high percentage of the world population suffers from infections by parasites,
which the WHO (World Health Organization) estimates are responsible for
15 million child deaths annually. In addition to the great cost represented
by deaths, chronic and persistent infections have increased as parasites have
developed multiple mechanisms of evasion and resistance to specific immunity.
This allows them to circumvent and cancel the host immune response.

Persistent parasitic infection in human hosts leads to chronic immune reactions,
which can result in tissue damage and altered immune regulation. Ninety
percent of the world population is infected with one or more parasites, and
up to five different types may coexist in the same host.

This situation becomes dangerous when the internal balance within the host
is upset, the number of parasites skyrockets, and the host begins showing
signs of serious illness that may even result in death. However, in some cases,
parasitic worm infections do not result in disease, in fact, a number of carriers
are found to be healthy.

← Cancer Cure with dewormer Turmeric - terrific all round health booster →

Sodium Borate - Borax Sodium Borate has a reputation extending back more than 200 years among medical doctors and homoeopaths for its anti-inflammatory...

Thanks to source link: https://growyouthful.com/remedy/borax.php Borax What is borax? Borax (sodium tetraborate hexahydrate or sodium borate) is a...

Fight Roaches and Other Household Pests with Colloidal Silver! Did you know you can spray colloidal silver on your floors (or simply mop your floors with it)...